skip to main | skip to sidebar

that they are enough. Right now, right where they are. It comes in a flash of recognition.

It is the first and last freedom! It is Pure Identity.

We are the world. This I structure creates the universe from an internal idea.

The sun rises, the stars are dazzling light,

The oceans comb their surface with waves of joy, everything created is created

Or co-created by this I structure. We are the world. So which you, which world?

Will we create today?

The point of power is always now. Hard to believe, but this is the basic truth of reality.

The Tide Turns Within:

The tide is in.

The sound is hushed.

The wave of thought well formed,

With ample space between.

Purpose is proposed upon itself.

Across a smooth back-drop,

The sky is clear,

All things are dispersed

To their proper place.

There is peace within! 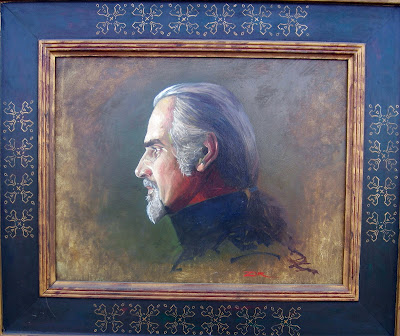 About me. A man or woman is defined by their passion or desire.

As a teenager I was an all-city football player in love with Judy McBride (who became Richelle, Rick, and Chet’s mother). After high school I went to the Pasadena Playhouse. I was on fire to be a great actor. But that fire was redirected into fine art under the loving guidance of Keith Finch (one of the most famous and inventive painters during the fifties and sixties). My study, or learning process, was a long drawn out affair; I loved all styles of art but would vacillate between abstract and realism.

In the late seventies I was contracted by the N.F.L. (through a wild business associate named Mike Brawsen). Over the course of the next five or six years I did posters, game day covers and many other projects for most of the N.F.L. teams, as well as a great many other sports franchises. I also met Arnold Schwarzenegger in the late seventies. He liked what I was doing with my sports art and invited me to help him promote his Mr. Olympia contest through poster art. My wife and I became pretty good friends with , often visiting him at his home. was yet to become a big movie star but already he was an accomplished business man. He’s a fun guy and for years we corresponded. I also enjoyed a close friendship with Fred Claire of the Dodgers, a great administrator during the Lasorda/O’Malley era, which some call the golden era of the Dodgers. My work still adorns the walls of their offices. During that time Al Davis of the Raiders hired me often and I worked for the Raider organization for about twenty eight years doing at least one project a year. My portrait of Al Davis is still in the Pro Football Hall of Fame at .

Of course, during all of this, my children were quickly growing up. Rick, my oldest boy was in his own rock band, Chet was making us laugh with his wild and often bizarre inventions, and Richelle had started the first vegetarian restaurant in town.

The late eighties was kind of crazy, Judy and I met many celebrities, and at times were involved with movie people. I remember Sylvester Stallone having our family up to meet him during his editing of his second movie, Paradise Alley; he was so great with the kids. It was really a fun day with Sly. I did work for him on Paradise Alley.

During this time commercial art was paying the bills but my heart was always pursuing my private visions (my love affair with the Vast Mind - this is the name I still use to describe that presence that is really all of us). In my early forties I studied that vast mind at the but my encounters with the vast mind dates back to when I was in my early twenties.

In my early fifties the kids were out of school; Chet had been awarded as being the best Artist in the area. He immediately went to to do FX work on his first movie, Rick continued his music (studying with the famous writer, composer Charles Albertine), and Richelle was busy with her restaurant.

Judy and I decided to move from to where it worked out that the solitude allowed both Judy and I to develop our crafts. I began showing in many galleries across the country and most of the art I painted was classical still life, which I loved; it was powerful. But that inner voice kept saying, “Hey! What about me?”

Judy was creating furiously and she developed one of the most fluent, yet inventive, writing styles I’ve ever read.

But life being what it is, my wife and I felt the urge to return to (this was in the late 90’s); there were now four grandchildren who were very important to us.

It has all gone by so fast. At my age now (though I’m still eighteen at heart) the important thing is my dream, or speaker, art, and trying to share my vision with as many like minds as possible. That’s why, with the help of the great Chet ( www.chetzar.com ) I’ve started a blog and web site.

I still wake every morning grumbling my way through duties until I can get to the “magic time”. That’s when anything is possible and I try to capture it in my dream catcher’s net called art.

Inspiration from the Other Side 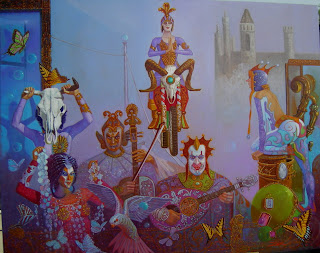 a correspondence is whispered

into the hummingbird heart

of he who waits

for the sonar echoes

exploding in his brain

of our 20th century days.

INSPIRATION
The flash of a diving hawk,
streaking across the palace of the mind.
Next, in the depth of an ocean,
Dolphins turn, plowing the night into a phosphorescent fire.
RUN SILENT! RUN DEEP!
Posted by Zar's Art at 3:31 PM No comments:

To run with the wolf pack of night, to make love with the maiden of dream! - To sit with the elders at the counsel of dawn. Desire and reason teach children to play- and old men and women to sing the song of eternity. This is the tribe of my being – the heart of the warrior, the mind of the poet, the body of a dancer, a soul that sits in the center of all there is.

God cannot be found in the chat rooms of the mind. God is craftily hidden in each pathos of the moment’s point of power. God or love or pure identity is the flight of the alone into the sacred alone. Here absolute value is explored in silence. This is motionless wisdom. This is the enormous quality of being from which all consciousness forms itself into living beings

The point of power is now. The point of pure identity is now. One’s life can be changed, enriched healed, only now. He or she who lives in the moment’s total event is free blessed and joyfully fulfilled. We usually live in various degrees of anxiety because our minds are pasting or futuring without being centered here and now, immortality is here and now.

Promote Your Page Too

Zar's Art
After starting this I became so fascinated with what I had to say that I knew I'd run out of room, so this is being continued as a blog: 9/17/07